Description:
A Twin Cities area husband and wife, riding in the family Suburban on a metro area freeway were suddenly confronted by the empty trailer of a semi that had lost control in the oncoming lanes, flipped over, and skidded on its side into their path. They saw the trailer for only an instant before crashing into it, too late to take evasive action. Both suffered extensive fractures requiring numerous surgeries, but were fortunate enough to avoid paralysis or brain injury. Suit was commenced in Hennepin County District Court and the case was settled at the pre-trial conference in 2009.

Description:
The case involved a 17-year-old man who was run over by a garbage truck. He suffered massive orthopedic and internal injuries including multiple compound fractures of his legs and a crushing injury to his pelvis. His urethra was obliterated and his colon lacerated. He had a colostomy which has been reversed. He has undergone several urologic surgeries and dilations. He is able to urinate however he also must self-catheterize. The liability issue involved negligence on the part of the driver and a direct claim against Waste Management for negligent hiring, negligence entrustment, and negligent supervision.

Description:
A young woman suffered severe orthopedic injuries in an automobile collision with a drunk driver. The driver had inadequate insurance, but his employer was found liable because he was returning from a golf club where he had made arrangements for a social event sponsored by his employer, and was therefore legally proven to be on the job at the time of the accident. 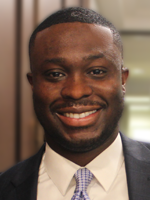 Description:
A family of three was involved in an accident on I-35W when the driver of their vehicle lost control due to snow and was eventually struck by a semi. All three sustained significant orthopedic injuries. Semi disputed fault.
Lawyer Team:
Kojo A. Addo, Cole J. Dixon