Schwebel, Goetz & Sieben Attorney Jenny Olson is the Recipient of the Minnesota Association for Justice’s 2020 “Member of the Year” Award 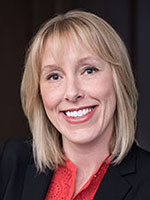 Minneapolis, MN, August 2020 – Personal injury law firm Schwebel, Goetz & Sieben is pleased to announce attorney Jennifer E. Olson is the recipient of the Minnesota Association for Justice’s (MAJ) 2020 “Member of Year” award. The annual award goes to a member who has advanced MAJ’s interests, demonstrated the highest ideals of the legal profession and exemplified legal excellence, professionalism, and ethics.

Jenny joined Schwebel, Goetz & Sieben in 2018 with significant experience fighting for injured people inside and outside the courtroom. She is an active member of the legal community and contributes to MAJ by serving on the Executive Committee, the Board of Directors, the Legislative Committee, the Women for Justice Committee and became Chair of the Amicus Curiae Committee in 2016. This past year as chair Jenny has re-energized and re-organized the committee to maximize effectiveness, and to encourage collaboration and support among the many talented writers on the committee.

The MAJ Amicus Curiae Committee is the best in the state and assists the legal profession by submitting briefs in support of issues before the Minnesota Appellate Courts. The committee accepts solicitations from members and non-members alike, provided that the case presents an issue of statewide importance to the legal profession or one which is significant to members. Jenny has a passion for motion writing and appellate advocacy because not only is it important to give individual clients the best chance at a fair outcome, but it allows her to advocate for more fair outcomes under the law for all people injured as a result of someone else’s negligence.

“Jenn generously utilizes her talent and energy advocating for consumer rights before the Minnesota Courts in cases that often have broad impact. Her successes have assisted accident victims throughout the state,” said Jim Schwebel, founding partner of Schwebel, Goetz & Sieben.

Jenny frequently presents at CLE’s, and is known for listening to all of the appellate oral arguments in state and federal courts to be aware of all issues that the amicus committee may want to participate in or could impact consumer rights in the state.

Jenny enjoys writing amicus briefs because it allows her to work with the talented attorneys who bring these claims and argue on their clients’ behalf in Minnesota’s Appellate Courts.  Writing a single amicus brief requires a time intensive commitment to a particularly important issue. Jenny has written four amicus briefs to the Supreme Court over the past year. Three of the amicus briefs helped to secure a successful outcome and the fourth amicus brief is in a case currently before the Minnesota Supreme Court.

The Minnesota Association for Justice was established in 1954 by a small group of lawyers dedicated to protecting the rights of the injured and accused. To learn more about the organization visit www.mnaj.org.

If you or a loved one has been seriously injured in an accident, contact the experienced personal injury attorneys at Schwebel, Goetz & Sieben at 612-377-7777 or toll free at 1-800-752-4265, or by visiting www.schwebel.com. There is no consultation fee, and their friendly, knowledgeable team will help you fight for your rights to fair compensation.